Our family has always been a fan of Korean Food, especially the barbeque. Complemented with kimchi, the barbeque is definitely a nice change from the usual Chinese dishes.

Since it was the Merdeka Day holiday, we crossed over to the newly opened Jusco Bandar Perda in Bukit Mertajam, Penang for our food hunting. This time around, we visited Che Go Korean BBQ Restaurant.  Getting there was the easy part but the jam upon entering the complex was deafening. After finding a car park and with growling tummies, we quickly made our way to the restaurant.

Most of the eateries were packed, and a line of customers were waiting for tables. We finally got ours at a nice little corner after waiting for twenty minutes. The staffs were way too busy to recommend their specialities, so we just flicked upon the rather large-size menu. 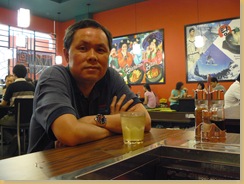 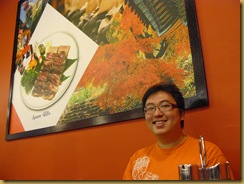 There are a few sets of bbq, ranging from RM78 to RM168.  A set is inclusive of a few dishes and is much cheaper compare to ordering the dishes individually.  We had the spare ribs bbq set which came with six plates of refillable appetizers – kimchi, cucumber, long beans, kacang botol, brinjal and bayam leaves.

Over at this restaurant and similarly in many Korean joints, the food is cook by the water on a metal plate over a gas cooker located at the center of the table. We had the pleasure to sit back and watch the food being cooked and at the same time enjoying the tastefully cooked marinated beef.

The is the fried Korean Seafood Pancake. A really simple dish of egg with vegetables and seafood but the combination turned out delicious.

Another dish was the Hot Pot Chicken with Bipim Bab (a version of claypot rice). We  found the taste rather bland. Then came the Korean Chicken Ginseng Soup. The chicken was stuffed with glutinous rice, Chinese chestnut and boiled with ginseng strands and red dates. It has very strong herbal ginseng taste.

The Special Korean Rice Cake has rice cake stir-fried in a slightly spicy and sweet chili sauce with large prawns together with  pieces of squid and fish cake. This dish is unusual, bit chewy and it was our favourite.

Finally, the Seaweed Soup with Dumpling. Nothing much to shout about for this dish, just a few dumplings in simple Miso Soup (do Koreans have Miso Soup anyway?). The skin of the dumplings were rather thick. Just a nice compliment for the meal as we already had the Ginseng Chicken soup.

This bbq set does not include complimentary fruits and desserts as compared to other outlets that we had patronized.

On the bright side, the cold green tea that we had with this delicious and fuss-free dinner is refillable, at RM2 per glass.

A very satisfied mom with an even satisfied son. 😀 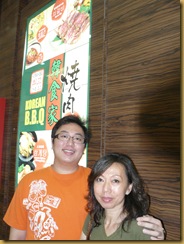 My hubby still prefer the Korea Palace BBQ Restaurant in Tanjong Tokong as the appetizers were marinated much tastier and moreover the food is cooked on charcoal.