The Malaysia Team led by Chef Audee Cheah, together with Chef Andy Leong and Chef Willy Soon, battle it out with their expertise and culinary skills on the two days culinary challenge and took home the:

During the competition, the trio from Penang prepared a soup, an appetizer, and an entree from their home country, and also Thai cuisine using Thai ingredients.

In celebration of the winnings, the Penang Chefs Association organized a dinner showcasing the Championship Winning Menu at Ixora Hotel in Bandar Perai Jaya, Penang. The chefs spent the day preparing the menu for the invited guests.

The guests were impressed with the delights of the Championship Winning Menu. The food looked good while maintaining the authentic taste. 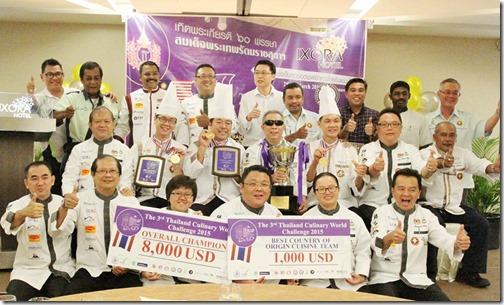 A group photo to the closure of the night’s event

For the month of May to July 2015, The Straits Cafe & Lounge at Ixora Hotel Penang is offering the Championship Winning Menu. Known as Thai Award Prestige Set, the three course set meal is priced at RM53 nett (including GST). It is available daily, from 12noon till 10.30pm.

* Thanks to Penang Chefs Association for extending this invitation.

Photos are courtesy of Ixora Hotel and William Tan.